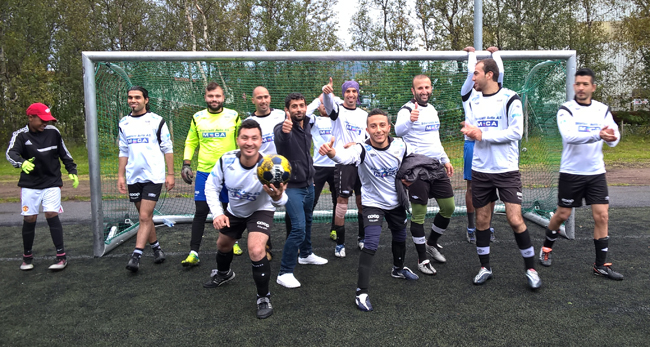 Lower division football team in Norway handing you a secret

Damascus is one of the oldest continually inhabited cities of the world. The city was inhabited as early as 8 000 to 10 000 years BC. It is the capital of picturesque Syria, the state of today that was founded after World War II. The country marred by a war threatening to uncivil the world.

Syria has been an important area to civilization for millenniums. It has for one been the crossroads between Asia, Europe and Africa. As an integral part of the Middle East it has had a declining importance for interventionist geopolitical interests since 1945, up until today.

In January 2011, the president Zine El Abidine Ben Ali of Tunisia had to flee his country because of protests against corruption and repressive policies. In the west known as the “Arab Spring” this event was the first of many protests, uprisings or armed rebellions in a series of Arab countries that followed.

In rapid succession countries such as Egypt, Libya, Yemen, Bahrain, Morocco, Jordan and Syria experienced revolt. As the dust has settled, there is still uncertainty in most countries. One key issue has been a lack of a clear alternative leadership. Unlike the fall of the communist bloc in Eastern Europe in the late 1980s, were the rebels had a clearer objective and alternative system in mind.

In Syria, the revolt without a clear objective and alternative in mind has dwindled into a devastating war. It is not a true civil war but more like a combatant’s war. It is a war with a multitude of fighting “tribes” and “confused” foreign participants. There is no clear front. This combatant’s war is more a fight for the sake of fighting, more than anything else. What are people fighting for? What are people fighting against? If the forces against the official government forces are able to overthrow President Bashar al-Assad, the alternative president will face the basic challenges as al-Assad has in Syria.

The key domestic challenge in Syria is the multitude of nationalities, religions and level of education. Syria is a melting pot of people. For instance, one percent is of Armenian descent. These were refugees and survivors of the Armenian Holocaust that the Ottoman Empire for the most part committed in 1915-23. Almost one tenth of the people in Syria are Kurds. The Syrian government has for more than fifty years claimed that many Kurds are illegal immigrants from Turkey.

The majority of the Syrian people are of the indigenous Levantine people, the people living in the eastern shores and areas of the Mediterranean Sea. Most of these people are Sunni Muslims. Most Kurds are also Sunni Muslims. President Bashar al-Assad is of the Alawite people. Part of the perceived problem of the Syrian government is that many leaders both civilian and military are of the minority Alawite people.

Prior to President Bashar al-Assad’s father Hafez al-Assad became President of Syria in 1971, only Sunni Muslims could become Head of State. The Sunni Muslims claimed al-Assad was a Shi’a Muslim in order to organize more rally against him. However, it is fair to say that the Alawite people have their own religion, albeit more secret and seemingly adoptable to both other customs and changing times. One of the fears of the today is that the Alawite people will be wiped out physically by a potential new Sunni Muslim majority leader. Nevertheless, Syria was by and large a peaceful nation prior to 2011.

In the autumn of 2015, Syrian along with other refugees poured through the gates into northeastern Norway from Russia. A number of them stayed for a year in a small village in Northern Norway. In the summer of 2016 a unique event occurred. Sunnis, Alawites, Kurds and so on from Syria played football in the regular football series for men. Not many teams anywhere in the world were purely made of players on the run.

Are we fighting? If there was a real Civil War in Syria, I wouldn’t be in Storslett.

What made this even more special and unconceivable, the players represented parties that are at war with each other in Syria! These footballers living temporarily in Storslett had their own team and played official games for the local football club, Nordreisa IL. In addition to fight together, their record was five wins and seven losses.

Sports and football, in particular, is peacemaking in action. But, this seemed a bit over the top, so I asked one of the players: How can you play together here in Norway and have fun, whereas you are fighting as mortal enemies in Syria?

The reply was simple and illuminating: Are we fighting? If there was a real Civil War in Syria, I wouldn’t be in Storslett.

The legitimate question is: How much of a civil war is the war in Syria?

In October 2004, Rafic Hariri left the post of Prime Minister. A few months later, a motorcade in Beirut was attacked with a TNT bomb force of 1 000 kilograms. DNA from a young male suicide bomber was reportedly found. 22 persons died, including former Minister of Economy, Bassel Fleihan, along with the revered Rafic Hariri.

The International community alleged that Hezbollah and the Syrian government were involved in the assassination of the Lebanese politician. This made little sense because Lebanon has been, and still is, longtime allies of Syria and Hezbollah. Both Syria and Hezbollah have denied the allegation.

Another twist, the western media (BBC) had questioned Hariri and Lebanon for not fighting Hezbollah as a terrorist group in November 2001. This was in the aftermath of the World Trade Center disaster on September 11, 2001. President George W. Bush had proclaimed to the world, that “Either you are with us, or you are with the terrorists”. The US led international community was possibly hostile to Hariri.

In any normal circumstance, there would be little interest for Syria to kill the ex. Prime Minister of ally Lebanon. However, it is quite clear that a weakened alliance between Lebanon and Syria was of interest for both the Israeli and the Americans. This shows that there is a possibility that external national interests can create undeserved problems for Syria.

In the wake of rebel events in other Arab nations, an internal situation of multitude paved way for external combatant’s interests in Syria

Compared to other areas of the Middle East and the Arab World, Syria doesn’t pose a great international interest, including for the USA. The USA has had a very strong interest and presence in the larger Middle East area ever since World War II, starting with the creation of the Jewish state Israel in 1948. In more recent decades the interest of the USA has mushroomed because of fossil fuels, other corporate interests, and in the war against terrorism.

Syria is a small stepping stone to some power structures in the Middle East. A Syria in turmoil is of interest for the USA. As long as bad agents, in the eyes of the US, are preoccupied in the Syrian Combatant’s War (Syrian Civil War), the threat to Israel and oil-filled areas seem diminished.

Because of its internal situation, Syria has become a lone political wolf in the Arab world. This has made the country vulnerable in international politics. For many years, in lack of international political leverage, the Syrian government has nurtured close ties to Hezbollah. Hezbollah is a paramilitary political force in Lebanon and an adversary to Israel. Shi’a Muslim Hezbollah has been supported financially by the Shi’a Muslim government of Iran.

A side effect of these political ties is a clash with the sphere of interest of the USA and other key countries.

Throughout the reign of both father and son al-Assad, Syria has had close ties to the Soviet Union and Russia. The port of Tartus is just east of Homs and north of the Lebanon border. The port of Tartus has for many decades been the only harbor in the Mediterranean Sea available to Russian activity, including military. The Soviet Union was the most important trade partner of Syria, and its break down was also a dent to the Syrian economy.

Although symbolic, the Russian interests today seem primarily of showcasing power. Russia wants to be perceived as a strong player on the international political arena. Since the Soviet Union folded, the USA has been the only superpower in the world. President Vladimir Putin and Russia is once again trying to get into the spot light. Syria is a great opportunity; originally, its intrinsic geopolitical value is small in international politics. Internal opposition in the USA against another full scale war in the Middle East makes the risk for Russia even smaller.

Nevertheless, the Russian challenge is poking the USA to get more overtly involved in Syria. In addition, all the Arab states in turmoil and with weaker governments have become a breeding ground for terrorist organization such as ISIL. Areas where terrorist can operate more freely, recruit more terrorist and even seize control over. The USA and its allies are at war against terrorism. The lawless “Wild West” territories such as current Syria have become the “Land of the terrorist” and thus a geographic target for the US allies.

In Syria, the civilians are paying a heavy price. One hundred years after Syria became a safe haven for the Armenian people, the people of Syria is in dire need of refuge. Millions of Syrians are internally displaced or fleeing abroad. The humanitarian catastrophe in Syria is disrupting civilization, the whole world.

The European Union is trembling on the compounded effect of economic crises in many of its member states and the influx of millions of refugees from Syria. The Syrian refugee situation is also gas to the fire of political democratic dissatisfaction in the USA.

The number of organizations and countries involved in the Syrian Combatant’s War is daunting. It seems all trouble makers are drawn to Syria, just because there is a brawl. The international community has almost stopped getting involved in Syria on civil matters, such as food and medicine supply. Instead weapons are pouring in, much to the delight of the weapon industry.

The Syrian Combatant’s War has lasted for five years. Syria needs stability for the next five years now at all political costs. A weapons embargo must be considered, the confidence in President al-Assad restored, and foreign nationals fighting in Syria should return home. Syria and the world are melting pots, if we cannot stop the collapse of peace minded Syria it might spread to the rest of the world.

Syrians and other teammates shoulder to shoulder with all-Norwegian opponent in a common cause for civility. Burfjord IL 2 vs Nordreisa IL 2 October 13th, 2016